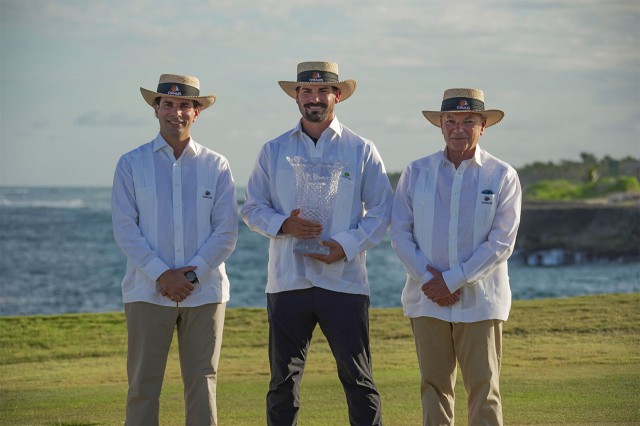 Beating all the odds established during the first few days of the tournament, American Chad Ramey won the championship after playing in close competition with Ben Martin and Alex Smalley, who tied for second.

Punta Cana, La Altagracia. – Chad Ramey is the new champion of the 5th Corales Puntacana Championship PGA TOUR 2022, taking with him the prize of US$666,000, of a prize pool of US$3.7 million, the highest registered in the history of sports in the Dominican Republic, and 300 FedExCup points.

The professional golf player received the winner´s trophy at an award ceremony headed by the president and CEO of Grupo Puntacana, Frank Elías Rainieri; Stephen Cox, PGA TOUR Tournament Official; the Dominican Republic´s Minister of Tourism, David Collado; and the founder and president of the Grupo Puntacana Board, Frank Rainieri.

The historic tournament concluded on the 18th hole of the Corales golf course.

The president and CEO of Grupo Puntacana, Frank Elías Rainieri, stated during the ceremony: “I greatly appreciate the PGA TOUR for once again placing their trust in us, and in Punta Cana, as a destination to celebrate this event. I would like to thank our supporters, volunteers and sponsors, who have carried out an impeccable job to ensure the success and excellence of this international event in our country.”

Mr. Frank Rainieri presented the new champion with the traditional Corales hat and a Guayabera, iconic symbols of the tournament. "I thank the Minister of Tourism, who has been present from the first moment, and an important ally for this fifth edition that concludes with great success," Rainieri pointed out.

Ramey, the new “King of Corales,” said: “I thank the volunteers and the Rainieri family for their hospitality and welcome. The Dominican Republic will always have a special place in my heart. I hope this is the first of many trophies on the PGA TOUR.”

Thousands of fans viewed the international event during the four-day tournament. The event was broadcast by the Golf Channel, reaching more than 525 million viewers in 153 countries. In the United States alone, 3.4 million viewers tuned in to watch the tournament.

Ramey, 29, was crowned after scoring -17. He is the youngest winner of the Corales Puntacana Championship. After holding the lead in each of the first three rounds this week, Ben Martin (-16) finished as runner-up alongside Alex Smalley (-16).

For the first time, Ramey also becomes the eighth winner of the season on the PGA TOUR and third in the tournament´s history, joining Brice Garnett (2018) and Joel Dahmen (2021).

Venezuelan Jhonattan Vegas (-15) played a solid game on the final day of competition, finishing fourth in pursuit of his fourth PGA TOUR win and first since the 2017 RBC Canadian Open.

About the Corales Golf Course

Corales Puntacana Resort & Club, home to the first and only PGA TOUR event in the Dominican Republic, was designed by world-renowned architect Tom Fazio. Opened in 2010, it is located next to the cliffs, bays, natural ocean inlets, inland lakes and coral quarries of the Caribbean Sea. It has 18 holes, six of them facing the sea and culminating with the last three holes that are also known as “The Devil´s Elbow.” They are considered to be one of the most spectacular and difficult final holes in the world.